How do you measure success? Recently in a conversation about a particular venture I am undertaking, I was asked this very question. In what way would I determine if the venture had been successful? In some arenas of life success may be obvious. First past the finishing line, jumped the highest, scored the highest grade seem to be obvious markers of success. But what if the runner ran with a disability? What if the student studied with a handicap? How then do we measure success…

Earlier this year we purchased a new horse for Spark of Hope – a big bay gelding with the somewhat plain name of “Steve”. We knew that Steve came with a few issues – through no-one’s fault, a life of competing and performing had left Steve with various physical issues. What we didn’t know was that Steve, apart from being physically in pain, was also mentally jaded. A horse who had given his best had simply reached the end of his tether. The result was that he was grumpy – grumpy with people, grumpy with other horses, grumpy with life.

What followed was months of massage and bodywork and rehab – carefully working through the various areas that were sore. It was with pleasure that we saw Steve respond physically – he changed shape, put on weight and muscle and begin to move with a greater freedom. But mentally, he remained distant. Despite our best efforts Steve seemed determined to keep us shut out.

It left me questioning our decision to buy him. The voices in my head – those voices that like to remind us of our inadequacies – questioned whether I really was the best person to help him. The easiest option would be to cut our ties – move Steve onto another home – bring in an easier challenge. But as I pondered about Spark of Hope and all that we stand for as an organisation it hit me – how can we talk about hope and healing for some but not Steve? How could we speak about a wonderful future for those who come but deny this to Steve? I read a great blog this morning and in it the author stated that great horsemen and women often say “you can’t rush a horse. You need to get to know them first.” And perhaps that is where I went wrong. In my impatience, I rushed. I had a plan, that plan had a timeline and Steve simply had to slot in.

So with a renewed focus, I have endeavored to do two things. Firstly, I try to do “more” with Steve – however, this doing more is actually about doing less. Yes, we do a little training, but I also try to simply hang out with the big bay horse. I seek to get to know him and for him to get to know me. Trust requires time and consistency – and these are two elements that I try to give to Steve. Secondly and perhaps even more importantly, I have chosen to believe. To believe that I can help Steve. To believe that despite the disappointments of the past few months that the future can be different – an 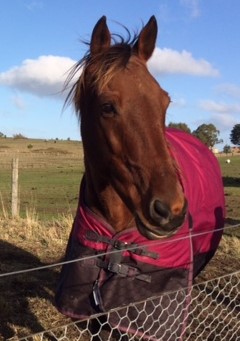 d that over time the big horse with the plain name can rediscover his true nature.

We live in a very “instant” world – we want results and we want them now. We also live in a world that no longer fixes broken things but throws them out and buys the next, improved better looking model. I had fallen into that thinking. I wanted a quick fix, and since it wasn’t coming, then I wanted to bail out. And so to that end, I guess in this little “Steve venture”, success will be measured by slightly different criteria. Success will be measured in our ability to keep going – to not give up and to continue to believe in a bright hope and future for Steve.

“So let’s not allow ourselves to get fatigued doing good. At the right time we will harvest a good crop if we don’t give up or quit.” (Galatians 6:9)

1 thought on “Not Giving Up”